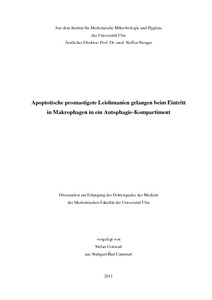 Leishmania major is an obligatory intracellular parasite. Its virulence, intracellular survival and replication after the infection of human macrophages depends on the presence of apoptotic promastigotes in the infecting inoculum. Focussing on Phosphatidylserine-positive apoptotic promastigotes that trigger the infection, it could be shown that they enter a compartment being positive for the autophagic marker LC3B. The percentage of apoptotic promastigotes correlated with the appearance of LC3B positive compartments. Regarding the lysosomal marker LAMP2 showed that the autophagic pathway was pursued until the fusion of the autophagosome with the lysosome. The medicinal induction of apoptosis did not increase the appearance of LC3B positive compartments. This finding and the fact that the covering of Phosphatidylserine had no effect on the appearance of LC3B showed that autophagy was induced by another trigger besides Phosphatidylserine. Lipophosphogylcan as the main virulence factor of Leishmania could also be excluded as inductor of autophagy. Blocking autophagy with Wortmannin led to a decrease of LC3B after infection and consecutively to a decrease of intracellular survival of Leishmania. All this indicated on the influence of autophagy in the context of an infection of human macrophages with promastigote Leishmania major.