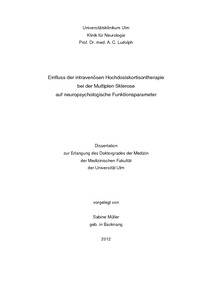 Objective: Treatment with high-dose corticosteroids is a well established therapy in multiple sclerosis (MS), but only few is known about its side effects on cognitive functions. Methods: Thirty patients with relapsing-remitting MS in early disease stage were treated for a relapse under double blind, randomized conditions. Ten healthy controls were matched for age, gender and cognitive abilities. To detect dose-dependent effects; half of the patients were randomized to receive 500 mg/d methylprednisolone (MP) over five days, the other half received 2000 mg/d MP. Neuropsychological investigations have been taken place before starting the therapy with corticosteroids (day 0); at day 6 and at day 60. Results: At day 6 significant deficits of free and cued retrieval of declarative memory were observed in the patients compared to day 0. These cognitive deficits were fully reversible at day 60. All other functions were unaffected. In contrast, the untreated controls showed a sligthly improvement in their declarative memory at day 6. No differences were found between the profile and severity of the cognitive impairment between the two MP groups. Conclusion: the findings suggest that high-dose treatment with MP is associated with selective, transient impairment of declarative memory recall in MS-patients. The reversible deficits do not show any dose dependency within the dose spectrum of 500 to 2000 mg/d.