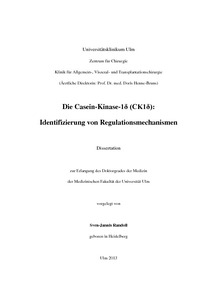 CK1delta is a member of the casein kinase 1 family. The Ck1delta isoform is involved in the regulation of various cellular processes. Deregulation as well as the occurrence of mutations within the coding region of CK1 family members seem to play important roles in the development of neurological disorders like sleeping disorders, bipolar I disorder, Parkinsonism-dementia complex of Guam and Alzheimer’s disease. In solid tumors, changes in CK1delta expression level and activity contribute to tumorigenesis and progression. So there is an increasing interest in generating highly specific inhibitors for personalized therapy. However, the efficacy of newly developed inhibitors is affected by the phosphorylation state of CK1delta. In fact cellular kinases phosphorylating CK1delta within its C-terminal domain have been identified but still more information regarding the role of site-specific phosphorylation in modulating the activity of CK1delta is required. Here we show that Chk1 phosphorylates rat CK1delta at serine residues 328 and threonine residue 397. CK1delta mutant proteins bearing one, two or three mutations at these identified phosphorylation sites exhibited significant differences in their kinetic properties compared to wild-type CK1delta. As a result these data point towards a possible regulatory relationship between Chk1 and CK1delta.