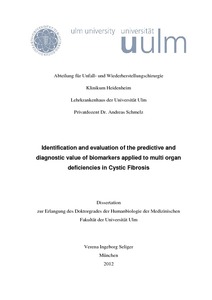 Cystic Fibrosis (CF) is a hereditary, systemic disease caused by mutations in the Cystic Fibrosis Transmembrane Regulator (CFTR) gene. This thesis focuses on class III (defective CFTR channel gating, e.g. G551D) and class II (defective CFTR folding/trafficking, e.g. F508del) mutations. Both cause severe symptoms. Assessed are effects of the potentiator ivacaftor (VX-770, KALYDECO^TM; Vertex Pharmaceuticals Inc.). Analyzed were biomarkers applicable to predict clinical efficacy. Data were taken from three previously performed randomized, double-blind, placebo controlled, multi-center trials. Patients with the G551D mutation, after receiving ivacaftor, showed significant improvements versus placebo: sweat chloride concentrations decreased substantially at day 15. At week 16 they showed improvements of FEV1 and weight gain. At week 24 IgG, IL-8 and CRP decreased. The question was, whether there would be a correlation between different biomarkers. In spite of the improvements seen for patients receiving ivacaftor, on the whole, it was not possible to correlate the sweat chloride concentration with FEV1 or weight. This problem was overcome by correlating the tendency of long term improvements with short term progress under the influence of ivacaftor: patients with sweat chloride concentration of ?;80 mmol/l or with decrease of sweat chloride concentration of >=20 mmol/l at day 15, have a high likelihood (positive predictive value of 86.3 %) of improving their lung function (>= 5 %) after 16 weeks. For ivacaftor patients the median FEV1 improvement was 16.7 %; for placebo patients 0.4 %. Patients aged 6 - 11 years likely experience a weight gain of 11.2 % after 16 weeks if their sweat chloride concentration had decreased by >= 40 mmol/l at day 15 (weight gain of 6 % if threshold not reached). These results open up a possibility of using biomarkers in the diagnostic and predictive process of CF.