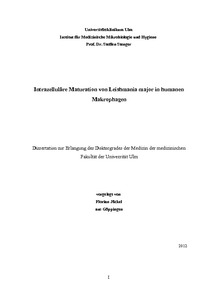 Leishmania major is a protozen parasite which infects human macrophages. There are two forms of these parasites, promastigotes and amastigotes. Both forms can infect macrophages. That´s why we were interested in the endocytotic pathway and the intracellular maturation of both forms inside the macrophage. We investigated different proteins which are characteristic in the endocytosis, in the early and late endosome, in the lysosom and in the autophagy process like EEA-1, LAMP 2, Caveolin, Clathrin, CD63, Rab7 and LC3b. We could show that promastigotes are inside of autophagosomal compartiments after infection and amastigotes not. We could also show that the apoptotic promastigotes which have phosphatidylserin in their membrane are not the cause of this effect.