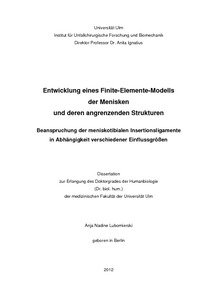 One of the most important functions of the human menisci is the load transmission between the incongruently bony structures and the lowering of the forces on the articular cartilage. To ensure the biomechanical function of the menisci, a secured fixation to the bone and the continuity of the collagen fiber network is important. An interruption of the circumferential collagen fibers as well as the avulsion of an insertional ligament will lead to an increase load on cartilage and menisci. In the present thesis a finite element model of a human knee joint was developed. Aim of the work was to examine the forces in the tibial insertional ligaments under different loading conditions. The highest force in an insertional ligament of about 29N was found during a simulated extension under 200N axial load. For 30° and 60° flexion angle under 1000N and 500N, respectively, lower forces were determined (maximum force 11N). It was assumed that the forces in the insertional ligaments vary in different regions dependent on the flexion angle. This assumption could be confirmed with the knee model. Friction within the knee joint between the different structures in contact has influenced the forces in the ligaments. In general, the forces in the ligaments were reduced with increasing friction. Complete unloading of one ligament was observed for high friction coefficients (µ=0,5). The effect of partial resection in the posterior region of the medial meniscus was examined. The parts of the ligament located along an extension of the defect were unloaded whereas the forces were increased in the outer parts of the ligament located along an extension of the loaded meniscus rim. This result should be considered in the case of partial meniscectomy near the bony insertion, to avoid long-term an overload. Different aspects for the development of meniscus replacement and the biomechanics of the tibial insertional ligaments could be determined.