Effects of cysteine mutations in the S4-S5 linkers from domains D1 to D4 on the fast inactivation of the voltage-gated sodium channel Nav1.4 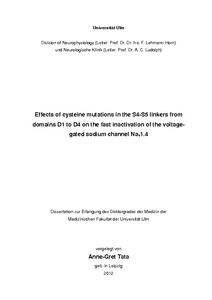 Ion channels play a vital role by fulfilling distinct biological functions like providing the basis for cellular electrical excitability. Mutations or defects in ion channels disturb the regular excitability and cause numerous diseases, so called ‘channelopathies’, including myotonia and epilepsy. The common pathomechanism of myotonias and periodic paralyses is an impaired fast inactivation of the skeletal muscle Na+ channel. Many aspects of the underlying molecular mechanism of this process are yet unknown. In this study we introduced cysteine point mutations in the cytoplasmic S4-S5 loops from homologous domains D1 (L250C), D2 (L700C), D3 (I1160C) and D4 (L1482C) of the a-subunit of the Na+ channel and studied the effect of these mutations in D1 and D2 alone and in combination with mutations in D3 and D4 domains using heterologous expression in a human embryonic kidney cell line, tsA201 and the whole cell patch-clamp technique. Strikingly, we found that the S4-S5 loops of domains D1 and D2 in cooperation with domains D3 and D4 are profoundly involved in fast inactivation of the Na+ channel as inactivation could be almost abolished by S4-S5 mutations in all four domains. The persistent Na+ current was less than 1.5 % for all corresponding single mutations of D1-D4/S4-S5. For L250C/L700C/I1160C/L1482C, however, we found a persistent current of nearly 80 %. These data clearly argue against a simple additive effect. Simultaneously, activation was profoundly influenced indicated by a strong hyperpolarizing shift of the activation curve. Among all single mutations tested, the cysteine mutation in position 250 in D1 had a bigger effect on the voltage dependence of activation which was similar to the effect of I1160C at the C-terminal end of D3/S4-S5, indicating an important role of these residues for channel activation. Finally, if cysteine point mutations were introduced in both positions, 250 and 1160, the alterations were more dramatic than for other double mutations.