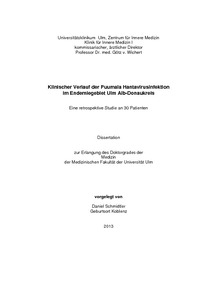 Puumalavirusinfection that causes Nephropathia Epidemica has been increasing during the last number of years in the southwest of Germany. This illness causes hemorrhagic fever with renal syndrome, associated with with a lot of different clinical symptoms and a huge variety of altered laboratory parameters. We compared clinical symptoms and laboratory parameters in 30 patients during their hospitalization, which occurred within the period from April 2004 until July 2007. We searched for parameters with predictive characteristics for clinical use as predictive value in renal failure. The more severe the renal failure, measured in modification of diet in renal disease (< 24,75 ml/min), the lower the haematocrit value at the minimal value (p = 0,007) as compared to the time of clinical discharge (p = 0,00098). The lower the haematocrit value, the higher the haematuria at the time of clinical admission (p = 0,01) as in maximum value (p= 0,006). Leucocyte count was directly correlated to thrombocyte count at all particular clinical times. The lower the thrombocyte count, the lower the leucocyte count at the date of admission, compared to the date of discharge. With 27 of 30 patients, the main incidence of infection was in the north of the Danube, as further indication of the Danube acting as a border against geographic distribution of the virus. The incidence of Puumalavirus infection also depends on the mean temperature which is seen in the correlation of incidence and data from the German weather service.