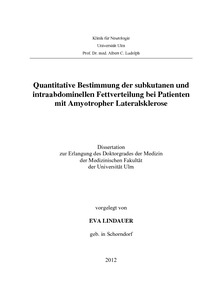 Background: amyotrophic lateral sclerosis (ALS) is a neurodegenerative disease that leads to death within a few years after diagnosis. Malnutrition and weight loss are frequent and are indexes of poor prognosis. Total body fat and fat distribution have not been studied in ALS patients. Objectives: The aim is to describe adipose tissue content and distribution in ALS patients. Fat volumes will be measured by MRI analysis and bioimpedance analysis. The respective fat volumes will be correlated with clinical data and adipocytokines. Design: A cross-sectional study in a group of ALS patients (n = 62, mean disease duration 22,6 months) along with age and gender matched healthy controls (n = 62) using a MRI-based method to study quantitatively the fat distribution was performed Results: Total body fat of ALS patients was not changed as compared with controls. However, ALS patients displayed increased visceral fat and an increased ratio of visceral to subcutaneous fat. Visceral fat was not correlated with clinical severity as judged using the ALS functional rating scale (ALS-FRS-R), while subcutaneous fat in ALS patients correlated positively with ALS-FRS-R and disease progression. Multiple regression analysis showed that gender and ALS-FRS-R, but not site of onset, were significant predictors of total and subcutaneous fat. Increased subcutaneous fat showed a trend towards longer survival in male patients but not in female patients Conclusions: Fat distribution is altered in ALS patients, with increased visceral fat as compared with healthy controls. Subcutaneous fat correlates with the functional status of ALS patients and higher subcutaneous fat in males shows a trend towards longer survival.