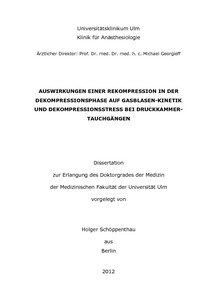 Introduction: The main cause for serious decompression sickness (DCS) in divers seem to be gas bubbles in the vasculary system caused by supersaturation of inert gas during decompression. Calculations and animal studies have shown that recompression during decompression can reduce the amount of bubbles and thereby probably the risk of decompression sickness. The current study should investigate the effects of FLIRT (First Line Intermittent Recompression Technique) on bubble formation in man. Methods: 29 healthy divers underwent 2 simulated dives with different decompression profiles in a dry hyperbaric chamber to a depth of 40 msw (500 kPa ambient pressure) in random order. An experimental decompression profile with repetitive intermittent recompressions (FLIRT) was compared to a well-established Buehlmann-based decompression profile served as control. Bubble formation was monitored up to 150 minutes after the dives by Doppler ultrasonic scanning of the right ventricular outflow tract (RVOT); quantification was done by using the expanded Spencer Scale. Thrombocytes, D-Dimers and Heat Shock Protein 70 (HSP70) were analysed before and 2 hours after the dives because of their potential role as markers of decompression stress. Results: Bubbles were detected in most probands in both dive profiles, range Spencer 0 - 4 . None of the divers had clinical signs or symptoms of DCS. There was no statistical significant difference in the bubble scores between the two dive profiles. No clinically relevant changes in thrombocytes, D-Dimers and HSP70 were found. Conclusion: The amount of bubbles was not reduced by repetitive recompressions during decompression (FLIRT) when compared to a standard decompression profile; so FLIRT cannot be considered generally superior to classical decompression procedures in regard to preventing DCS.