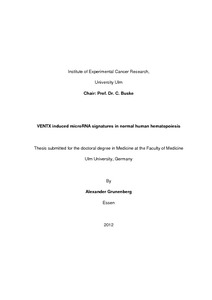 In recent years, numerous advances have been made in our understanding of the molecular network which regulates the self-renewal and differentiation of hematopoietic cells. It has thus been possible to demonstrate that homeobox genes, which play a role in embryonic body formation, also have a relevant part to play in hematopoiesis. As a member of this homeobox gene family, VENTX has been characterized functionally in recent years, demonstrating that it has a significant influence on the differentiation of hematopoietic cells and plays a role in malignant hematopoiesis. Although some target genes of VENTX have already been identified, there is still a need to further elucidate the role of VENTX, including in relation to malignant hematopoiesis. Possible candidate genes include the non-coding miRNAs, which are also of fundamental importance in many physiological processes and are still relatively unstudied. The aim of this work was to examine the influence of VENTX on the expression of miRNAs. To test this, human umbilical cord blood cells was transduced with VENTX or the blank control vector by means of retroviral gene transfer and the expression of several hundred miRNAs was measured quantitatively by TaqMan Low Density Arrays. This allowed the identification of differentially expressed miRNAs between cells aberrantly expressing VENTX and normal controls.