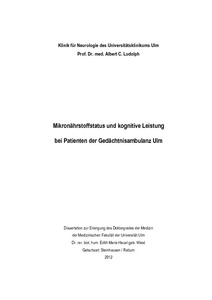 Deficiency in micronutrients - vitamins and minerals - may add to impaired cognitive function and development of dementia in elderly. The objective of this study was to assess the micronutrient status and associated domain-specific cognitive performance of elderly out-patients of the memory clinic Ulm (Germany) with special focus on B-vitamins (B1, B6, folic acid, B12), antioxidant vitamins and provitamins (A, C, E, carotenes, lycopin), and redox-active minerals (Fe, Cu, Zn). Cognitive performance was assessed via a standardised test program. Eighty-eight out-patients, aged 58 to 88, were evaluated. Major diagnoses were Alzheimer disease and mild cognitive impairment. B-vitamin blood concentrations were mostly in the respective reference ranges, but homocysteine was elevated above normal in almost half of the patients. The status of antioxidant vitamins and minerals was more variable. Despite adequate micronutrient status, some associations between cognitive performance and micronutrient status were detected. Low level of premorbid intelligence was associated with lower folic acid and vitamin B12 blood levels than normal premorbid intelligence level. Additionally, patients with poor performance in a test on visuo-construction and at least in some working memory tests were shown with lower folic acid levels than patients with normal test performance. Patients with lower levels of Fe status were shown with attention deficits. Clustering of patients according to their cognitive performance revealed two separate groups with differences in their folic acid and Fe status. In conclusion, lower levels of folic acid- and Fe-status, even though within the reference range, were associated with deficits of performance in specific cognitive domains in out-patients of the memory clinic Ulm. Further prospective studies of longer duration including more patients should be initiated to verify these preliminary findings.