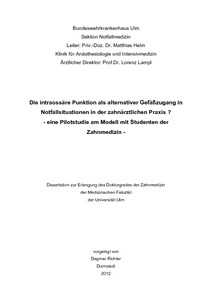 Background: In most German dental schools medical emergency education provides instruction in peripheral venous and intraosseous access. The aim of this study among a group of dental students was to compare this with peripheral venous puncture. Methods: A 1 h lecture was followed by a practical training session including four different scenarios: 1 peripheral venous puncture, 3 intraosseous punctures with manual (MAN-IO), semiautomatic (EZ-IO) and automatic (B.I.G.) IO systems in which the participants had to perform vascular access on a dedicated training device. Results: The duration for succesfully establishing peripheral vascular access was significantly longer than for intraosseous access, independent of the IO technique used and the shortest insertion times were noted for the manual IO system.There were no significant differences regarding insertion times between semiautomatic and automatic IO devices. For all four puncture devices the success rate was 100 % with a maximum of three attempts. The highest success rate for primary puncture attempts as well as the lowest number of total puncture attempts was in the EZ-IO system. Technical problems as well as handling problems were observed in the MAN-IO and the BIG-IO systems. The EZ-IO and and B.I.G. systems were rated best regarding user friendliness and user safety. The EZ-IO was rated best as the device of first choice in dental practice in emergency situations by the study participants. Conclusion: The data has shown that student dentists were able to achieve vascular access not only very fast but with a high success rate.