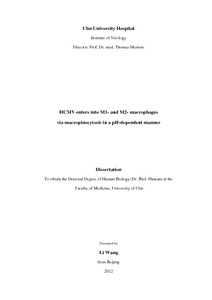 Human cytomegalovirus (HCMV) is a ubiquitous Herpesvirus causing morbidity under conditions of impaired immune control. Previous data of our laboratory demonstrated that the susceptibility to HCMV infection, quantified as the percentage of cells expressing the immediate early gene products IE 1-2 at 24 hours post infection, was dramatically different: very low ( roughly 30 %) into M1-Mphi, and in contrast very high ( roughly 70%) in M2-Mphi;. Because it was still not known how HCMV enters and establishes infection into Mphi, we decided to investigate HCMV the entry mechanisms into these two types of Mphi. The first data showed that shortly after infection HCMV particles acquired different cellular distribution in M1- and M2-phi. While the majority of vesicles containing viral particles remained in the cell periphery in M1-Mphi, they accumulated in proximity of the nucleus in M2-Mphi thus suggesting a more efficient intracellular translocation in this cell type. Since the size of HCMV particles is compatible with the average size of macropinosomes, we considered macropinocytosis as a mechanism used by HCMV to enter Mphi66;. Since the actin polymerization inhibitor Latrunculin A caused a significant reduction of the IE 1-2 expression in M1- and M2-Mphi, we could demonstrate that actin polymerization was required for HCMV infection. Then, macropinosome formation appears to be uniquely susceptible to inhibition by amiloride, by using EIPA we could show that both the expression of IE 1-2 viral proteins were inhibited in both M1-and M2-Mphi. Another peculiar feature of macropinocytosis is the high sensitivity to pH variation. By using lysosomotropic agents, respectively we obtained strong reduction in the percentage IE 1-2 positive cells thus demonstrating that HCMV infection of M1- and M2-Mphi takes place by a pH-dependent pathway. In summary, our data indicate that HCMV is internalized in M1- and M2-Mphi by a macropinocytosis pathway followed by a pH-dependent release of the capsids.