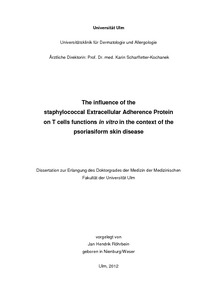 Psoriasis is a common inflammatory disease of the skin with a pathologic shift towards uncontrolled proliferation of type 1 cytokines-producing autoreactive responder T cells (Tresp), most likely due to an impaired suppressive function of regulatory T cells (Tregs). The staphylococcal extracellular adherence protein (EAP) exerts immunomodulatory effects in inflammatory disease models by binding to several ligands, including the intercellular adhesion molecule ICAM-1, which is the main ligand of the beta 2 integrin Lymphocyte function-associated antigen-1 (LFA-1) which is expressed on lymphocytes. Our group found EAP to be capable of resolving the psoriasiform skin disease in the CD18hypo mouse model which expresses reduced levels of LFA-1 on lymphocytes with impaired function of Tregs resulting in enhanced proliferation of Tresp cells. This MD thesis shows that addition of EAP during the education of Tregs by dendritic cells (DCs) was sufficient to dose-dependently impair the suppressive function of Treg cells towards Tresp cell proliferation in vitro. On molecular level, EAP interrupted the cell-cell contact between antigen presenting DCs and Tregs on the level of ICAM-1-LFA-1 binding, comparable to the effects of neutralizing antibodies directed against ICAM-1 or the two chains of the LFA-1 beta 2 integrin, CD18 and CD11a and the humanized anti-LFA-1 antibody Efalizumab (Raptiva®), indicating that EAP specifically targets the interaction between ICAM-1 and LFA-1. Blocking of ICAM-1 on endothelial cells with decreased transmigration of Tresp cells at the inflammatory sites in the skin most probably contributed to the improvement of the psoriasiform skin inflammation in vivo. By cluster formation assays between DCs and Tregs or Tresp cells respectively, we could prove that EAP disrupts the physical interaction between these cell populations, as the numbers of DCs-Tregs and of DCs-Tresp cells clusters were significantly reduced in presence of EAP.