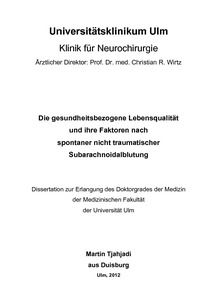 OBJECTIVE: This study sought to determine the impact of spontaneous subarachnoid hemorrhage (SAH) on health-related quality of life (HRQOL). METHODS: Data were taken retrospectively from 601 patients (219 male, 382 female) treated between 1998 and 2008. Questionnaires concerning HRQOL were circulated prospectively, and the responses from 253 patients (81 male, 172 female) were analyzed. The questionnaires comprised the standardized Short-Form 36 (SF-36) and Short-Form 12 (SF-12) Health Surveys, a number of nonstandardized questions, and visual analogue scales. Statistical analysis of the results was exploratory, using unifactorial ANOVA (Scheffe), multivariate analyses of variance. RESULTS: The HRQOL is reduced considerably by SAH and remains so for a period of 10 years. Physical and emotional domains are primarily affected, but also cognitive functions, including memory and concentration in particular. Similarly, certain roles are affected that prove difficult to rehabilitate after acute care and cause serious debility in the long term. The Hunt and Hess Scale, Glasgow Outcome Scale, and seizures were found to have the greatest impact on HRQOL. Cerebral vasospasm had little influence on HRQOL in our patient population. Prophylactic treatment with Nimodipine had a positive impact on HRQOL. CONCLUSION: Documentation of HRQOL after 6 to 12 months is useful because patients are often found to have a diminished HRQOL in the absence of a clear physical impairment. Because psychological, emotional, cognitive, and social functioning influence HRQOL in the long term, efforts at rehabilitation should focus in particular on improving such factors. Documentation of HRQOL is a useful, additive tool for consolidating and evaluating the outcome, and a treatment end point after SAH, respectively.