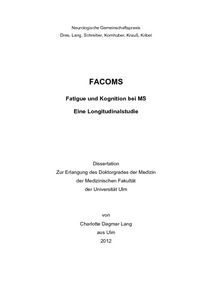 Objective: prospective multi-center study to define subjective and objective experienced fatigue in MS in the course of two years by addressing the following questions: (1) How does fatigue influence the clinical, behavioral and cognitive variables in the early progress of the disease? (2) What factors need to be defined that contribute to fatigue in MS? (3) How and above all do fatigue and personality correlate? (4) Does depression play a significant role in the development of fatigue in MS? Design: Monitoring of clinical, behavioral, neuropsychological and psychological (mood, personality) variables in RRMS patients with and without MS-associated fatigue over 2 years. Inclusion criteria: 18-50 yr, RRMS/McDonald, EDSS 0-3,5, interferon ß-1b therapy (>3 months, no longer than 2 years). Results: Most consistently of the neuropsychological variables a significantly negative effect of disease course and EDSS was found for the delayed recall of the non- verbal VVM. There were multiple significant effects of clinical, behavioral and psychological variables on the self-assessment of distraction, tiredness and slowing during cognitive processing and practical activities (FEDA). Significantly negative influences on FEDA were shown by depression and several personality traits. Fatigue was significantly influenced by EDSS, depression, some personality traits, i.e. performance orientation, strain, social desirability, and active disease coping, but not disease duration. Conclusion: (1) Fatigue does not impair cognitive performance, only aspects of sustained attention, and above all self-perception of deficits. (2) Fatigue in early MS is influenced by personality traits, disease coping, depression and clinical status.