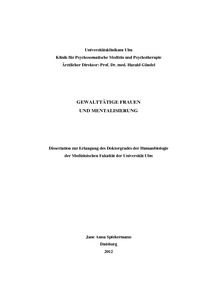 The aims of the international study were (1) to examine the mentalizing capacity of women who have turned to violence, and (2) the connection between their mentalizing capacity and their respective attachment representation. The sample included 52 women who were either in a prison or, under court order, in a medium secure psychiatric hospital in the UK or in Germany. Method: 52 transcripts of "Adult Attachment Interviews" with the participants were analyzed. The interviews were assessed by a rater (who had been trained and certified as reliable) using the "Reflective-Functioning-Scale"; the same sample had already been rated with regard to the respective attachment representation in previous studies by Lamott, Adshead, and McGauley. To some extent the results were unexpected: Those women who were not securely attached proved to have a relatively highly developed mentalizing capacity and there were no significant differences in the mentalizing skills when comparing the women according to the severity of the crimes they had committed.