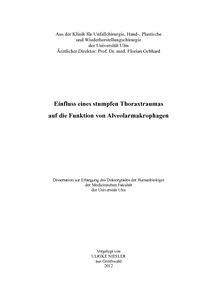 Blunt chest trauma is a common injury in accidents and worsens the prognosis of polytrauma. The focus of this research was the role of alveolar macrophages (AM) in the inflammation after blunt chest trauma. In particular, the release of cytokines in the alveoli, the increase of the AM cell population by the migration of monocytes into the lungs and the regulation of the local and systemic cytokine release were investigated. The role of the AM in the local cytokine release after trauma was examined by analysis of cytokine concentrations in bronchoalveolar lavage and AM culture supernatants as well as analysis of mRNA expressions of AM, alveolar-type-2 epithelial cells and interstitial macrophages. The chemotactic activity of monocytes was analyzed in vitro by chemotaxis assay and in vivo by fluorescence labeling of AM and was correlated with chemokine receptor mRNA expressions. For investigation of their regulatory role, AM were depleted before trauma and cytokine concentrations in bronchoalveolar lavage, lung tissue, Kupffer cells, and plasma were analyzed. The release of chemokines into bronchoalveolar lavage and culture supernatants of AM increased after trauma. Cytokine mRNA expressions in AM increased significantly 48 hours after trauma. The relative increase of cytokine expressions in alveolar-type-2 epithelial cells and interstitial macrophages after trauma was much lower than in AM, however, absolute cytokine mRNA expressions exceeded those in AM. After blunt chest trauma, mononuclear cells migrated into the lung. The increased chemotaxis of circulating monocytes and interstitial macrophages to chemokines was supported by increased mRNA expressions of specific chemokine receptors. Cytokine levels in bronchoalveolar lavage fluid and lung tissue of AM-depleted animals were increased late after blunt chest trauma. Systemically, chemokine release of Kupffer cells was suppressed in non-depleted animals, which was abrogated by AM depletion. These results suggest a relatively small contribution of the "resident" AM to the cytokine release after blunt chest trauma. In contrast, AM mitigate the inflammation after blunt chest trauma by regulating the local and systemic inflammatory response.