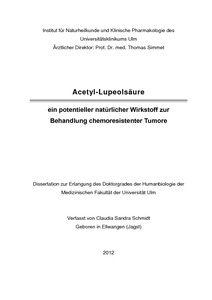 The serine/threonine kinase Akt/PKB is often implicated in the development and progression of cancer. Acting as key regulator of different signaling pathways, Akt is an interesting molecular target for tumor therapy. The triterpene lupeol is known to inhibit Akt signaling and has anti-tumorigenic properties even in chemoresistant cancer cells. In this dissertation it will be shown, that the natural pentacyclic triterpene acetyl-lupeolic acid (ac-LA) from the oleogum resin of Boswellia carterii reduced viability of androgen-independent PC-3 prostate cancer cells and pancreatic MIA-Pa-Ca-2 cancer cells more effective than lupeol. In contrast to the common used chemotherapeutic agent docetaxel, there were remaining no resistant cancer cells. It will be demonstrated by several parameters including DNA fragmentation and caspase-3-activation that ac-LA induced apoptosis in PC-3-cells without affecting autophagy. At the molecular level, ac-LA potently inhibited Akt mainly by direct interaction with the PH-domain. It was revealed the modulation of different members of Akt-dependent signaling pathways by ac-LA in PC-3 cells including glycogen synthase kinase 3, P70 ribosomal six protein kinase and the nuclear accumulation of the NF-kappa B protein P65, ß-catenin and c-Myc. Turned out to be such an effective agent, the anti-proliferate and anti-tumorigenic effect of ac-LA was confirmed on PC-3-tumor xenografts onto chick chorioallantoic membranes (CAM) and in nude mice and it was observed no overt systemic toxicity. Thus, ac-LA might provide a promising agent for the treatment of chemoresistant human tumors such as androgen-independent human prostate cancer.