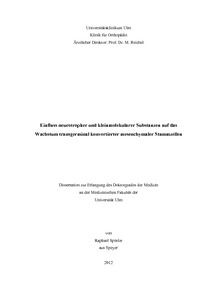 Background: Mesenchymal stem cells (MSC) could be a promising source for the therapy of neurodegenerative diseases. Various protocols have been investigated for the transgerminal conversion of MSC into neuronal stem cell-like cells (mNSC). This study evaluated the effect on proliferation and apoptosis of protocol variation by adding substances playing a role in neurogenesis. Methods: Proliferation was measured by cell cycle analysis using flow cytometry, immunostaining with BrdU, and cell counting. Apoptosis was evaluated by Annexin/Propidiumiodid (PI) staining. For some factors, CD 318 expression was analysed. Morphology was observed during the conversion process. Results: Proliferation of MSC was higher (26 %) compared to mNSC growing under adherent conditions (12 %) or growing in suspension (8 %). The difference between adherent and suspension culture may be explained by anoikis, that is cell death by loosing contact to the extracellular matrix. The growth factors brain derived neurotrohpic factor, fibroblast growth factor 8 and sonic hedgehog showed no effect on proliferation or apoptosis. Leukaemia inhibitory factor (LIF) increased cell death as revealed by annexin/PI staining. Valproat acid changed the morphology of the cells (the cell body became more flat and the cell branches became longer and more numerous). The histon-deacetylase inhibitor Trichostatin A (TSA) showed an increase of S and G2/M phases, but decreased cell numbers. This effect could have been induced by a cell cycle arrest. TSA and LIF increased the CD318 expression. Retinoic acid caused a high apoptosis rate in the used concentration. Conclusion: None of the substances used in this study showed a significant improvement of proliferation or a decrease of apoptosis. Further studies should evaluate how the substances work on the reprogramming of MSC, especially with regard to the recently found transcription factors responsible for the pluripotency of stem cells.