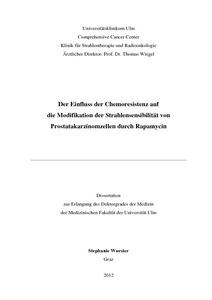 Introduction: Modern chemotherapy is more and more based on specific interference with signal transduction for which it is difficult to predict interactions with radiotherapy. Using a model system with three different prostate cancer cell lines, the modification of radiosensitivity by chronic selection with paclitaxel and by acute exposure to rapamycin was tested. Methods: In PC-3, LNCaP and 22Rv1 cells with distinct alterations of signal transduction systems, the cell cycle distribution (DNA flow cytometry up to 48 hours post-exposure) and clonogenic survival (colony forming assay) after acute X-irradiation (0-5 Gy) served as biological endpoints of radioresponsiveness in the presence or absence of the mTOR inhibitor rapamycin. Results/Conclusion: Under chronic selection with paclitaxel, resistant sub-strains were obtained from all three cell lines; PC-3 even became paclitaxel-auxotrophic. In order to compare radiosensitivities, mean inactivation doses were derived from the dose-response curves after linear-quadratic fitting. Up to 16 hours after irradiation, all cell lines showed the typical G2-arrest. In contrast, rapamycin induced a G1-arrest of the cell cycle in all parent cell lines and their sub-strains. In LNCaP and 22Rv1 with their at least partially intact signal transduction for androgens and growth factors, rapamycin was antiproliferative. Upon concomitant radiation, it was radioprotective but had little influence on cell cycle distributions. In PC-3 cells with an at least triple deficiency of signalling pathways (PTEN, androgen receptor and p53), rapamycin showed autonomous cytotoxicity. After combined exposure it had a radiosensitizing effect with a pronounced G1-arrest. In summary, neither chronic selection with paclitaxel nor acute and specific cell cycle interference with rapamycin led to consistent, predictable modifications of the radiosensitivity of prostate cancer cell lines.