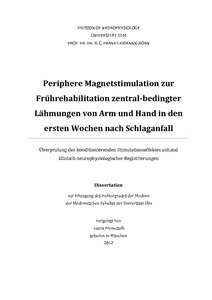 The repetitive peripheral magnetic stimulation (RPMS) is an innovative therapeutic approach, which is applied for the treatment of central paresis of the upper limb in the neurological rehabilitation. The treatment of the consequences of this complex clinical picture pushes the current medical options to the limits of its possibilities. The basic principle of RPMS is the representation of the peripheral induced proprioceptive inflow to the central nerve system within the context of sensorimotor integration. Previous studies could attest a reduction of an existing spastic paresis, an induction or optimizing of voluntary motor function and a reduction of neglect. This thesis makes a further contribution to the investigation of the effect of RPMS and dwells on its utilization in the early neurological rehabilitation for the first time. The majority of the patients subjectively perceived a reduction of the existing neglect and a variation of the muscle tone. In all objectivity, clinically a reduction of the neglect and a reduction of the paresis could be most often examined. Comparing the data of the electromyogram with the graphical results of the goniometric records, variations of the muscle tone were indicative. The collected findings and results underline the described effects of previous studies within. Because of the small number of patients it has not been however assuredly possible to evaluate to what extent a flaccid paralysis is influenced by RPMS, in contrast to the proven reduction of a spastic paresis. By reduction of the paresis, normalization of the muscle tone and removal of the neglect, RPMS can contribute to an early perception and use of the patient’s affected arm in order to counteract an immobilization. Concluding it is to be hoped that all therapeutic rudiments for the mobilization after stroke are not discrete but rather are combined in the context of a multimodal approach to help the patients at best.