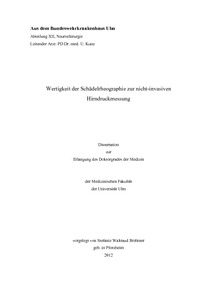 Aim of this study was the evaluation of the potential of cerebral rheography for non invasive ICP measurement. Rheography is based on heartbeat depending changes of intracranial impedance which is recorded with common ECG electrodes placed frontal, temporal retromastoidal and occipital. A light non remarkable current is delivered by both external electrodes while changes in electrical resistance are messured by thy internal electrodes. Each person has individual basis impedance depending on the blood/cerebrospinal fluid ratio in the cranium. Every heartbeat induces a change in this ratio which can be measured as a change in resistance. The achieved curve was analysed depending on the heartbeat. First safety, reproducibility and applicability were tested by a pre-study with 14 healthy subjects. ICP-changes were induced by body position chances with a tilting table. Afterwards measurements on 23 patients parallel to invasive ICP measurement were performed. An algorithm to analyse the rheogramm was developed by calculating the ascending ratio of the curve. It was observed that the ascending ratio dropped when body position was raised. A good graphic correlation between invasive measured ICP and Rheogramm was seen as well as between both ascending ratios. Further measurements while lumbar infusion testing and alternated PEEP in respirated patients were performed. Rheography is a save, cost-efficient, easy applicable and combinable with other ICU measurement methods. There were seen recording problems especially when ICP became negative or with uncooperative patients.