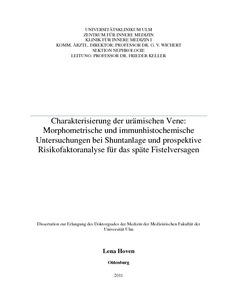 Hemodialysis treatment requires a well-functioning vascular access. Access patency is limited by the development of venous intimal hyperplasia, which predisposes to fistula stenosis and subsequent thrombosis. We prospectively followed 100 consecutive patients receiving a primary arteriovenous hemodialysis fistula. At the time of fistula creation, a 5 mm segment of the future shunt vein was removed and examined by histology and histomorphometry. Intima-to-media ratio (IMR) and intimal thickness indices (ITI) and expression of TGF-beta and N-Cadherin were documented. Clinical data were followed for at least one year. 31 patients (31 %) showed histologically normal vessel walls with an IMR of of 0.3 + 0.15 and ITI of 0.13 + 0.05. The other 69 patients (69 %) showed intimal hyperplasia with a significantly increased IMR of 1.2 + 1.04 and ITI of 0.35 + 0.22. Veins with intimal hyperplasia and late fistula failure showed a significantly increased expression of TGF-beta in intima, media and vasa vasorum. Veins with intimal hyperplasia also showed a significantly increased expression of N-Cadherin in endothelium and intima, whereas veins with a late fistula failure had a significantly decreased expression of N-Cadherin in the media. Patency of fistulae was 60 % after 6 months, 57 % after 9 months and 56 % after 12 months. Intimal hyperplasia did not predict the development of stenosis, nor did the localization of fistula, sex, age, number of cardiovascular risk factors, diabetes mellitus, arterial hypertension, smoking, hypercholesterolemia, hyperparathyroidism, body mass index, use of low dose acetylsalicylic acid/ beta-blocker/ sartans or statins, nor haemoglobin levels or CRP predict stenosis. In a cox regression model, we found a hazard ratio (HR) of 8.3 for the use of erythropoietin (p = 0.04), HR of 5.3 for comorbid peripheral arterial disease (p = 0.009), HR of 2.5 for comorbid coronary artery disease (p = 0.03) and HR of 0.2 for the use of ACE-inhibitors (p = 0.02).