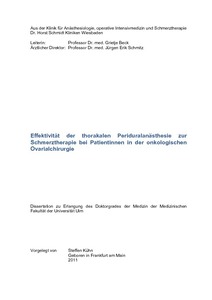 Thoracic epidural anesthesia (TEA) is a major component in modern "Fast-Track" concepts developed in visceral surgery. Due to the success of these concepts, TEA has gained widespread acceptance in other operative fields. Modern concepts for treating ovarian cancer favor a radical surgical approach. Only few studies concentrated on the influence of TEA on perioperative morbidity, analgesia and perioperative quality of life in patients with ovarian cancer. We conducted a prospective randomized trial to evaluate the effectiveness of TEA for perioperative analgesia compared with a conventional opioid based approach using the Numeric Analog Scale (NAS) and the ppp33-questionnaire. 102 patients were enrolled, of which completed 84 the trial. No differences in baseline characteristics were found between the groups. NAS was significantly lower (p < 0.01) in the TEA group while both groups had a relatively low median NAS < 3. In all aspects of the ppp33-questionnaire, we found no significant differences between the groups and therefore a comparable subjective quality of life. While published studies investigated "fast track" approaches combining a bundle of measures, we concentrated on the effect of TEA alone. While the TEA group had a lower NAS, the relevant clinical advantage is questionable with only slightly higher NAS in the opioid group with no benefit for perioperative life quality. In conclusion our study does not favor the use of TEA for pain treatment alone in the perioperative setting. Other effects still might prove beneficial, but have not been investigated in this trial.