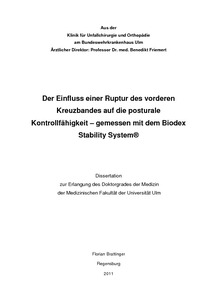 Background: Anterior cruciate ligament (ACL) rupture is one of the most serious sports-related injuries. It is associated with the loss of the stabilizing function of the ACL and considerable damage to intraligamentous receptors that provide proprioceptive feedback to the spinal cord and central nervous system. Purpose: It is unclear to what extent the loss of proprioceptive feedback affects postural control or, in other words, the ability to maintain an upright posture. We therefore investigated and qantified the influence of ACL rupture on postural control. Patients and Methods: We studied 58 patients (age: 25.9 ± 7.6 years, height: 175.8 ± 24.4 cm, weight: 81.9 ± 12.0 kg) with isolated unilateral ACL rupture using computerized dynamic posturography (CDP) and compared the stability of injured and uninjured legs. The presence of an ACL rupture had been confirmed by mechanical laxity testing, MRI and arthroscopy. Depending on their knee function, patients were classified as copers and non-copers and examined for their ability to control posture. Results: Mean overall stability index (OSI) scores were 3.7° ± 1.5° for injured legs and 3.0° ± 1.1° for uninjured legs (p < 0.001). A subgroup analysis revealed mean OSI scores of 3.4° ± 1.2° for copers and 4.0° ± 1.6° for non-copers (p = 0.11). Conclusions: During eyes-open testing, postural control was reduced by 23.3 % in patients with unilateral ACL rupture. This is a possible explanation for the subjective feeling of instability reported by many patients. The absence of a significant difference between copers and non-copers may be the result of an inadequate sample size, which had not been calculated for a comparison of these groups. Level of evidence: Prospective study level II