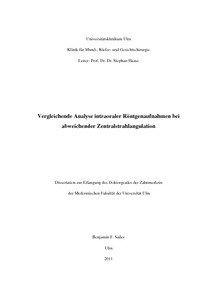 The angulation of the x-ray tube during the creation of digital intraoral radiographs affects the diagnostic findings in the pictures. The influence of the angulations on the diagnosis of secondary caries and the insufficient crown margin should be made clear with the help of two mandibles from the Institut für Anatomie und Zellbiologie. For the creation of the radiographs three different tubes like Heliodent DS (Sirona), Gendex Expert DC (KaVo Dental), Focus (KaVo Dental) and the sensor system Gendex Visualix eHD were used. With this study it was proved, that the risk of a wrong positive caries diagnosis is especially high in the radiographs with mesial, distal and coronal eccentric angulations, because in these cases an increased occurrence of artifacts was observed. If a secondary caries is present, it can be noted that the wrong negative diagnoses dominate and because of this the caries, even with cavitation, remains often undetected. It was observed that the radiographs with an angle of 90° on the sensor showed the highest correlation with the real situation. Therefore it is essential for the diagnosis of secondary caries to pay attention on the right angulation of 90° during the creation of intraoral radiographs. Advanced training for the employees and practice with the equipment are of fundamental importance. In case of the detection of insufficient crown margins, no adequate angulations can be specified. Therefore, the diagnosis of insufficient crown margins without radiographs is suggested. Significant differences between the tubes could not be observed. The use of the positioning device for supporting the setting into the right angulation had no advantage concerning the diagnosis of the approximal caries.