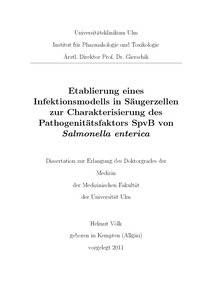 The extra-chromosomal virulence plasmid Spv (Salmonella plasmid of virulence) plays an important role in Salmonella enterica pathogenicity encoding amongst others for the ADP-ribosyltransferase SpvB. The SpvB protein catalyzes the modification of G-actin with mono-ADP-ribose resulting in the depolymerization of the actin cytoskeleton. In infected cells, SpvB is translocated into the host cell cytosol from intracellular Salmonella-containing vacuoles. To study the effects of SpvB we used three different S. enterica strains: wild type (WT), a SpvB-deficient strain (Mvp 528) and a strain with an additional plasmid carrying a HA-tagged SpvB (p2967). The aim of our project was primarily to characterize SpvB in these strains in terms of expression and activity and to analyze the secretion of SpvB in more detail. First, all three S. enterica strains were characterized with respect to their growth properties and showed a similar exponential growth. In addition, SpvB was detected in strain p2967 by a polyclonal anti-SpvB antibody, whereas strain Mvp revealed no SpvB expression. The presence of HA-tagged SpvB in strain p2967 was confirmed by immunodetection with an anti-HA antibody. To check the biological activity of the expressed SpvB, we performed an in vitro ADP-ribosylation assay. Modification of G-actin was observed in WT strain and, to a higher extent, in p2967 strain. In contrast, the Mvp strain did not catalyze the modification of G-actin. Afterwards, we established an infection model in mammalian cells. Therefore, we tested the suitable multiplicity of infection (MOI) by using MOIs between 0.1 and 100 and observed the morphological changes during 24 h. Next, we showed the successful uptake of Salmonella into the macrophages by plating lysates from infected J774A.1 cells on LB-Agar. To gain more insight into the translocation of SpvB and to address a possible participation of host cell chaperons, we finally analyzed the fate of SpvB in infected cells.