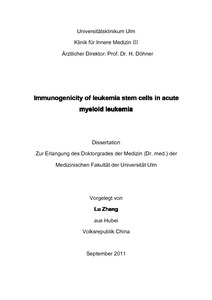 Leukemia stem cells (LSCs) are likely to be the source for leukemic disease self-renewal and the cause for relapse of acute myeloid leukemia (AML) after treatment, and thus, a critical target for therapeutic options. This study established an efficient method to separate LSCs from AML samples and separated LSCs. Moreover we also tested HLA-I and co-stimulatory molecules expression on LSCs and investigated expression of LAAs in LSCs. LSCs were separated from peripheral blood mononuclear cells (PBMC) of AML patients using fluorescence-activated cell sorting (FACS) and magnetic-activated cell sorting (MACS) according to their unique immunophenotype: CD34+CD38-. Efficiency of the two methods was compared to establish a preferred assay. Normal HSCs were separated from healthy volunteers (HVs) as a control group. Meanwhile, the other three populations (CD34+CD38+, CD34-CD38+ and CD34-CD38-) were also separated from both AML and HV samples. Microarrays were performed to compare the gene expression of relevant immunological parameters, such as LAAs in these cell populations. Multicolor FACS was performed to detect the expression of HLA-I and co-stimulatory molecules on LSCs. By comparing purity and yield, we proved that FACS sorting was more efficient than MACS. We separated all the four populations from peripheral blood of 10 AML patients and 5 HVs with FACS. For the 10 AML samples, the purity of all populations obtained was more than 90 %. HLA-I was expressed and CD86 was preserved on LSCs. Microarray showed that the LAAs WT1 and SSX2IP showed significantly higher expression in LSCs than in HSCs, thus they could be used as the target for immunotherapy against LSCs. In conclusion, FACS sorting is a widely efficient method to separate LSCs from patients with different subtypes of AML. HLA-I and co-stimulatory molecules are detectable on LSCs. Microarray data showed that LAAs are expressed in LSCs. Therefore, AML LSCs is a feasible target of CTLs based immunotherapy.