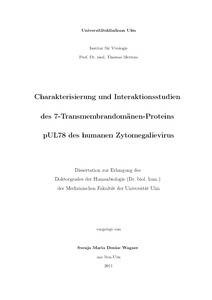 The human cytomegalovirus (HCMV) UL78 ORF is considered to encode an orphan 7-transmembrane receptor (7-TMR). However, until now the UL78 protein (pUL78) has not been characterized. Therefore, the aim of this thesis was to elucidate the function of pUL78. UL78 was expressed in the cytoplasm and was found mainly associated with the endoplasmic reticulum. We provide evidence that pUL78 is also localized on the cell surface from where it is quickly endocytosed. Using the bimolecular fluorescence complementation assay and co-immunoprecipitation experiments it could be shown, that pUL78 is able to form homomeric and heteromeric structure of pUL78 and the US28 protein, respectively. However, the absence of pUL78 had no effect on the inositol phosphate accumulation triggered by the US28 protein. Summarized, the results of this thesis suggest that the UL78 protein of HCMV traffics between the cell surface and cytoplasm from where it might be recycled via early endosomes.