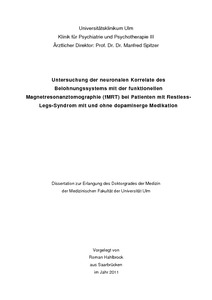 Treatment with dopamine receptor agonists has been associated with impulse control disorders and pathological gambling (PG) secondary to medication in previously unaffected patients with Parkinson’s disease or restless legs syndrome (RLS). In a withinsubjects design, we investigated the underlying neurobiology in RLS patients using functional magnetic resonance imaging. We scanned 12 female RLS patients without a history of PG. All patients were scanned twice: once whilst taking their regular medication with low dose dopamine receptor agonists and once after a washout phase interval. They performed an established gambling game task involving expectation and receipt or omission of monetary rewards at different levels of probabilities. Upon expectation of rewards, reliable ventral striatal activation was detected only when patients were on, but not when patients were off medication. Upon receipt or omission of rewards, the observed ventral striatal signal under medication differed markedly from its predicted pattern which by contrast was apparent when patients were off medication. Orbitofrontal activation was not affected by medication. Chronic dopamine receptor agonist medication changed the neural signalling of reward expectation predisposing the dopaminergic reward system to mediate an increased appetitive drive. Even without manifest PG, chronic medication with dopamine receptor agonists led to markedly changed neural processing of negative consequences probably mediating dysfunctional learning of contingencies. Intact orbitofrontal functioning, potentially moderating impulse control, may explain why none of the patients actually developed PG. Our results support the notion of a general medication effect in patients under dopamine receptor agonists in terms of a sensitization towards impulse control disorders.