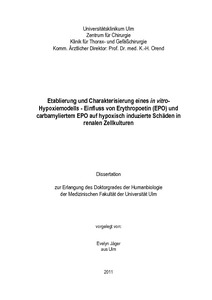 OBJECTIVE: Thoracic aortic clamping for vascular replacement causes eminently ischemia/ reperfusion (I/R) injury especially of kidneys and spinal cord. Up to now there is no appropriate in vitro-model to review molecular processes during induced I/R-injury. Aim of this project is the development and characterisation of an in vitro hypoxia model for renal cell lines as well as to examine the effect of erythropoietin (EPO) and carbamylated EPO (cEPO-FP) during induced hypoxia/reoxidation on a cellular level. METHODS: Induction of hypoxia in HEK293 and LLC-PK1 cells is accomplished by regulation of oxygen concentration in culture medium and further cultivation in a hypoxia chamber (24 hours). Among other things like oxygraphical studies, monitoring of proliferation rate as soon as the expression of different apoptosis related genes was carried out. During 24 hours of hypoxia cells were treated with EPO and cEPO-FP respectively. RESULTS: Cells showed a high tolerance up to 4 - 8 hours of hypoxia. After 24 hours of hypoxia cells showed a significant higher stabilization of inducible factor 1 alpha (HIF1alpha) as well as a significant higher expression of AMP activated kinase beta 1 (AMPKß1). Cells also showed morphological changes, lowered proliferation rate and different expression in apoptosis related genes. A significant higher activation of Caspase 3, 7 and 9 was found and changes in expression profiles of members of the BCL-2 family and of IAPs (inhibitor of apoptosis). Also a significant higher release of cytochrome c and SMAC/Diablo could be determined, whereby cEPO-FP seemed to be superior to native EPO. CONCLUSION: Establishment of a cell culture based model to investigate molecular processes during hypoxia/reoxidation according to the clinical problem of I/R was successful. It could be demonstrated that hypoxic cells under EPO and cEPO-FP treatment have a distinct bettered outcome compared to hypoxic cells without any treatment.