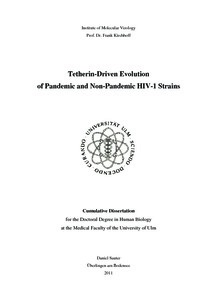 With more than 30 million infected people world-wide, HIV-1 is the major causative agent of AIDS. Until today, four different groups of HIV-1 (M, N, O and P) have been described. Each of them represents an independent cross-species transmission of simian immunodeficiency viruses from gorillas (SIVgor) or chimpanzees (SIVcpz) to humans. Interestingly, only HIV-1 group M is responsible for the global AIDS pandemic, whereas the other groups remain largely restricted to Western Africa. The reasons for these differences in spread were unknown. I hypothesized that a better adaptation to the human host restriction factor tetherin may explain the more effective dissemination of HIV-1 group M. It has been shown that tetherin inhibits the release of budding virions and can be counteracted by the accessory protein Vpu of HIV-1 group M. My investigations revealed that SIVcpz and SIVgor, the direct precursors of HIV-1, employ their Nef proteins instead of Vpu to antagonize the restriction factor tetherin. Human tetherin, however, contains a deletion in its cytoplasmic tail that renders it resistant to Nef and therefore poses a significant barrier for zoonotic transmission of SIVs to humans. This finding challenges the dogma that SIVcpz did not have to overcome major barriers to efficiently infect humans. Furthermore, I could show that only pandemic HIV-1 M mastered the tetherin hurdle perfectly by gaining Vpu-mediated anti-tetherin activity. In contrast, Vpus of nonpandemic HIV-1 O and P do not antagonize tetherin and those of rare group N gained moderate anti-tetherin activity but lost their second function: the degradation of the viral receptor CD4. Thus, the present thesis provides the first plausible explanation why only one out of four independent cross-species transmissions of SIVs from apes to humans is almost entirely responsible for the global AIDS pandemic.