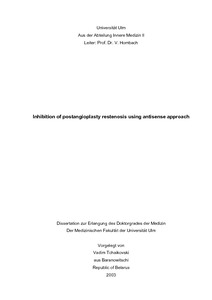 Restenosis remains the major longterm limitation following angioplasty. The platelet-derived growth factor receptor (PDGFR) system was shown to be involved in the process of restenosis through stimulation of smooth muscle cell (SMC) migration and proliferation. Antisense technology is promising for the inhibition of this pathway. But low enzymatic resistance of oligodeoxynucleotides (ODN), their poor cellular uptake and non-specific effects are still major limitations of this technology.We have used partially phosphorothioated ODN corresponding to nt 71-88 (ATG77) and nt 266-283 (ATG269) of rat PDGFR-beta mRNA. We employed both naked (n) and poly-D,L-lactide/glycolide encapsulated ODN nanoparticles (ODN-NP). Cellular uptake was studied. With rat SMC isolated by explant technique from female Sprague Dawley rat aortas, we tested ODN cytotoxicity, impact on SMC proliferation, PDGFR-beta expression and activation. ODN-NP were taken up by the cells at a much higher rate (significant uptake after 2 hours) as compared to nODN (very low uptake after 24 hours). The nODN proved to be nontoxic up to concentrations of 30 microM/L. nODN (ATG269) showed an inhibition of PDGF-BB stimulated SMC DNA synthesis by 53 % at 10 microM/L, which was more pronounced than in the case of a scrambled nODN. Likewise, nODN (ATG77) showed sequence- and dose-independent inhibition. All ODN-NP exerted potent inhibitory activity on DNA synthesis in a dose-dependent, but sequence-independent manner. The effect was stronger in case of ATG77. Both nODN and ODN-NP were unable to inhibit PDGFR-beta expression. nODN and ODN-NP directed against the predicted initiation sites of rat PDGFR-b mRNA revealed potent biological activity whereas the exact mechanism of action remains to be elucidated. These ODN may be useful for the prevention of restenosis.