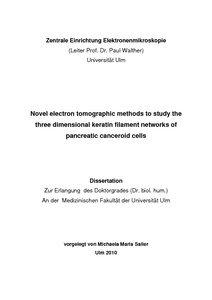 The aim of this study was to expand existing methods for two dimensional data acquisition of the keratin filament network with the goal to obtain three dimensional datasets. For this purpose different novel electron microscopical methods were applied and compared. Thin sections of high-pressure-frozen and freeze-substituted Panc1 cells were analyzed using STEM at accelerating voltages of 300 and 30 kV. However, it was not possible to track the filaments, since they are hidden by other cell compounds. Therefore, these cell compounds were removed by an extraction method, so that only the keratin filaments remained. These samples were then analyzed simultaneously in STEM and SEM mode. Since keratin filaments have a diameter of only about 12 nm, the volume-dependent STEM signal did not yield enough contrast of the thin filaments. The signal to noise ratio of filaments compared to unextracted cell compounds was, however, increased, when imaging with the surface-dependent secondary electron signal, which is strong from the thin filaments. As a new approach, tomograms using the secondary electron signal were recorded in the SEM at an accelerating voltage of 5 kV by tilting the sample with 2° step size to a maximum tilt of - 60° to + 60°. For this purpose a special pre-tilted holder was developed. The resulting image series was reconstructed into a three-dimensional model and could then be analyzed with statistical methods. To investigate whether artifact formation occurred during critical point drying, control samples were prepared using a freeze drying protocol. When comparing freeze dried keratin filament networks with critical point dried samples, no differences in network characteristics could be found. In both cases the filaments showed similar branching and directional distribution. We conclude, therefore, that the keratin filament network is more robust than the actin network and thus less affected by disturbances during extraction, fixation, dehydration and drying.