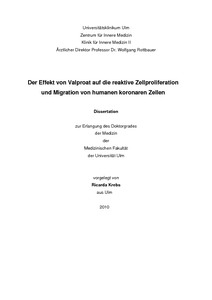 This study investigates the effect of VPA on proliferation and migration in human coronary vascular cells. Methods and results: The theoretical clinical relevance of the data is estimated with a SI/MPL-ratio, which is defined as the relationship between a significant effect in vitro (SI) and the maximal plasma level in vivo (MPL). Cell culture: HUVEC, human umbilical endothelial cells; HCAEC, human coronary artery endothelial cells; HCMSMC, human coronary media smooth muscle cells. Proliferation assay: HUVEC, HCAEC, and HCMSMC were seeded as described. VPA was added in six different concentrations ranging between 50 and 300 µg/ml. At day 6 the cell number was calculated in relation with the cell number at day 1. Cell toxicity: Cytotoxic effects of VPA were studied in concentrations ranging from 50 to 300 µg/ml. Migration assay: Migration of HCMSMC after incubation with VPA in concentrations ranging from 50 to 300 µg/ml was studied for a period of 24 h. Proliferation assay: Strong dose-dependent antiproliferative effects were detected after 5 days of incubation with all the three tested cell types. In HUVEC, significant antiproliferative effects were found with VPA in concentrations of 100 µg/ml (P < 0.05, SI/MPL-ratio: 1.0) and more. In HCAEC and HCMSMC, significant antiproliferative effects were detected after incubation with VPA in the concentrations of 50 µg/ml (HCAEC: P < 0.01, SI/MPL ratio: 0.5; HCMSMC: P < 0.001, SI/MPL-ratio: 0.5). Migration assay: No effect on cell migration was detected after incubation of HCMSMC for a period of 48 h with VPA in concentrations ranging from 50 to 300 µg/ml. Cell toxicity: In HUVEC, HCAEC, and HCMSMC significant toxic effects were detected in all the VPA concentrations studied. Conclusion: Significant dose-dependent antiproliferative effects of VPA with SI/MPL ratios of 0.5 identify the drug as a promising candidate for both systemic and local therapy, such as drug eluting stents, of postinterventional restenosis.