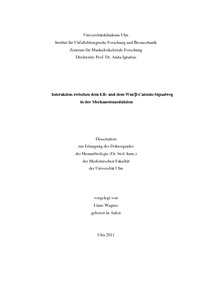 Bone mass homeostasis is regulated by an interaction of various factors, including growth factors, systemic hormones and mechanical loading. Two signal transduction pathways, the estrogen receptor (ER) and the Wnt/beta-catenin signal transduction pathway, have been shown to have an important role in regulating osteoblast and osteoclast function and to be involved in mechanotransduction. Therefore, dysfunction of these pathways can lead to osteoporotic bone loss. However, less is known about the modulation of gene expression by the interaction of these pathways in response to mechanical strain. We performed in vitro stretch experiments using osteoblastic MC3T3-E1 cells to study the effect of both pathways and mechanical strain on the expression of cyclooxygenase-2 (Cox-2), which is involved in the synthesis of prostaglandins, modulators of bone formation and resorption. Using specific agonists and antagonists, we demonstrated a regulation by an interaction of these pathways in mechanotransduction. Estradiol (E2) had a sensitizing effect on mechanically induced Cox-2 expression, which seemed to be ligand-specific as it could be abolished using the antiestrogen ICI182,780. However, mechanical strain in the presence of Wnt signaling activators diminished both the E2 sensitizing effect and the stimulatory effect of Wnt signaling in the absence of strain. This interaction might be one regulatory mechanism by which mechanical loading exerts its role in bone mass homeostasis.