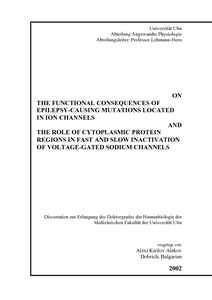 Ion channels provide the basis for excitability in nerve and muscle cells. This thesis presents the functional characterization of K+ and Na+ channel mutations causing inherited epilepsies and a structure-function study about the role of two cytoplasmic protein regions of the voltage-gated Na+ channel. Three epilepsy causing mutations 2513delG in the KCNQ2 channel (causing benign familial neonatal convulsions) and T685M and R1460H in the voltage-gated Na+ channel (associated with generalized epilepsy with febrile seizures plus) were expressed and functionally characterized. For all three mutations changes were found explaining the occurrence of epileptic seizures. Fast inactivation in voltage-gated Na+ channels is believed to function in the so-called "hinged-lid" fashion - a hydrophobic particle of three amino acids (IFM) occludes the pore from the intracellular site of the membrane. Possible binding sites for the inactivation particle are the D4/S6 segment and the D4/S4-S5 interloop. Two mutations in the intracellular loop D4/S4-S5 (L1482C/A) were investigated. Both mutations introduced prominent effects on fast and slow inactivation, demonstrating that D4/S4-S5 loop is involved in the regulation of the before mentioned processes. The applied thermodynamic analysis showed no functional cooperativity of D4/S4-S5 region and the inactivation particle in fast inactivation. To investigate in detail the role of segment D4/S6 in Na+ channel gating, the amino acids at positions F1586, V1589, M1592 and I1596 were substituted by cysteines and the effects of the mutations and application of MTS reagents, covalently binding to cysteines, were studied. All gating transitions, following activation were strongly affected, demonstrating a central functional role of segment D4/S6 in the gating of voltage-dependent Na+ channels. Additionally, the reported effects propose that the slow inactivation gate in Na+ channels contains the cytoplasmic part of segment D4/S6.