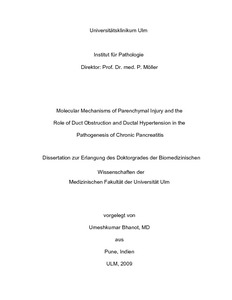 The pathobiology of chronic pancreatitis (CP) remains enigmatic despite remarkable progress made recently in uncovering key mechanisms involved in the initiation and progression of the disease. CP is increasingly thought of as a multifactorial disorder. Apoptosis plays a role in parenchymal destruction, the pathological hallmark of CP. The apoptotic mechanisms preferentially target the exocrine compartment, leaving endocrine islets relatively intact for a prolonged period. Exocrine cells shed their "immunoprivileged" status, express death receptors, and are rendered susceptible to apoptosis induced by death ligands on infiltrating lymphocytes, and released locally by activated pancreatic stellate cells. Islet cells retain their "immunoprivileged" status and activate anti-apoptotic programs through NF-kappaB. Ductal changes, including distortion, dilatation, and pancreatic ductal hypertension in the setting of CP, induce genomic damage and increased cell turnover. In addition, signaling mechanisms that play a role in the development of embryonic pancreas are reinstated, thus, playing a role in repair, regeneration, and transformation. This, in turn, leads to acino-ductal metaplasia (ADM) and pancreatic intraepithelial neoplasia (PanIN). Some of these pathways are activated in pancreatic cancer. We attempt to integrate the current knowledge and major concepts in the pathogenesis of CP and to explain the mechanism of differential cell loss. We outline the possible implications of signaling pathway activation in pancreatic inflammation, relevant to the cellular transformation that may cause transformation leading to pancreatic neoplasia.