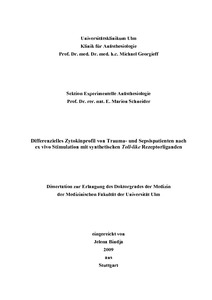 To understand the nature of immune dysfunction in patients with sepsis manifesting after severe trauma, a robust whole blood ex vivo test system (TruCulture(TM)) has been developed. Methods: One milliliter of blood was drawn into separate syringes containing ligands to stimulate the following TLR2-9. Amongst many others, the biomarkers TNF-alpha, Interleukin-1beta and TNF-alpha followed by IL-1RA and soluble TNF-RII were quantified by multiplexed sandwich immunoassays. The IL-1-ratio and TNF-ratio following stimulation with LPS, were defined as the ratios of IL-1beta [pg/ml]/IL-1RA [pg/ml] and TNF-alpha [pg/ml]/sTNF-RII [pg/ml], respectively. Results: When compared with healthy donors, most TLR induced cytokines were lower in trauma and even lower in sepsis patients’ cultures. An exception was the TLR2 stimulation, which induced more inflammatory and anti-inflammatory cytokines as well as soluble receptors in trauma and sepsis than in healthy donors. Among the other TLR responses, TLR3 was most dramatically downregulated in patients with trauma and even more in sepsis patients. Calculating the IL-1-ratio and the TNF-ratio, we found a patient-type specific ratio of ligand to antagonists. Healthy donors had a median IL-1-ratio of 1.48 and a median TNF-ratio of 2.73, trauma patients had 10 times, and sepsis patients had 100 times lower IL-1 and TNF-ratios. Conclusion: The here developed TruCulture(TM) ex-vivo whole blood TLR stimulation test is valid to correlate a defined response pattern to the clinically established stages trauma and sepsis. Results may substantially contribute to signalling pathways leading to immune dysfunction.