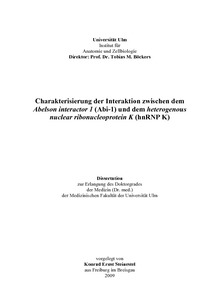 It has been shown that cytoskeletal reorganization is a prerequisite for synaptic maturation in hippocampal neurons. Abelson interactor 1 (Abi-1) has been shown to play a crucial role in these processes, although its exact role remained not fully understood. Therefore, a yeast-two-hybrid screen was performed to identify interaction partners for Abi-1. One of the possible interaction partners was heterogeneous nuclear ribonucleoprotein K (hnRNP K), a nuclear and cytoplasmatic localized protein with mRNA-binding capacity. In this work, the interaction of hnRNP K and Abi-1 in hippocampal neurons could be confirmed and it could be shown that it is mediated through an KI/SH3-domain interaction. Furthermore, expression patterns of hnRNP K protein and mRNA throughout the rat central nervous system were analyzed. Finally, it could also be shown that hnRNP K binds Abi-1 mRNA with high affinity, leading to an increase in Abi-1 protein expression. These results suggest an important role for hnRNP K in the post-transcriptional regulation of Abi-1 protein expression and therefore for synaptic plasticity and maturation.