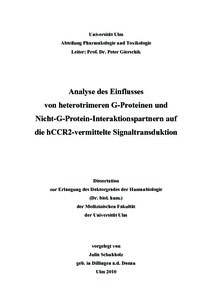 Transmembrane signaling of chemokines is mediated by chemokine receptors, members of the G protein-coupled receptor family, which are coupled to pertussis toxin-sensitive and certain cases, also to pertussis toxin-insensitive G proteins. We have previously reported that stimulation with CCL2 of the two human CC chemokine receptors CCR2a and CCR2b transiently expressed in COS-7 cells resulted in inositol phosphate formation and serum response factor (SRF)-dependent transcriptional activation of a luciferase reporter gene. We now report that ligand-dependent induction of SRF activity was specifically mediated by Galphaq and Galpha14, but not by Galpha11 and Galpha16 in these cells. Furthermore we identified a juxtamembrane octapeptide that is important for interaction with the previously identified non-G-protein interaction partner tumor protein D52 of CCR2 receptors and that might be critically involved in Gq protein activation and intracellular trafficking of the receptor polypeptides.