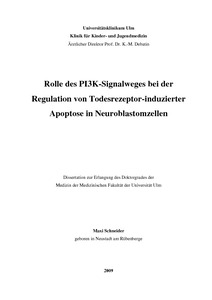 Despite multimodal therapy the cure rate of patients with highly aggressive neuroblastoma, one of the most common childhood cancer diagnosed, is still very poor. To design novel effective treatment protocols an improved understanding of the molecular background of the disease is necessary. We recently showed that active Akt, a key mediator of the PI3K/Akt/mTOR survival pathway, is frequently found in primary neuroblastoma samples and correlates significantly with poor prognosis in these patients. Since most current cytotoxic therapies aim to kill tumor cells via induction of apoptosis, the aberrant activation of the PI3K/Akt/mTOR pathway signals is a promising target to further sensitize neuroblastoma for conventional therapy. Here, we report that inhibition of PI3K/Akt/mTOR signalling by the pharmacological inhibitor PI-103 sensitizes neuroblastoma cell lines for death receptor mediated apoptosis and has a strong effect on longterm survival. This holds true not only for TNF-related apoptosis inducing ligand (TRAIL)- and agonistic antibodies against TRAIL receptor 2 (ETR2)-induced cell death, but also for CD95-mediated death. Analysis of underlying molecular mechanisms revealed that combination treatment with PI-103 and TRAIL is associated with enhanced cleavage of caspases and Bid and significant loss of mitochondrial membrane potential. Upstream to the mitochondrial pathway, the combination treatment seems to affect the expression of two other Bcl-2 family proteins, Mcl-1 and Noxa. The results of this work indicate that Noxa and Mcl-1 play a role in death receptor mediated apoptosis. In conclusion, the combination of PI-103 and death receptor triggering represents a promising therapeutic approach for neuroblastoma treatment.