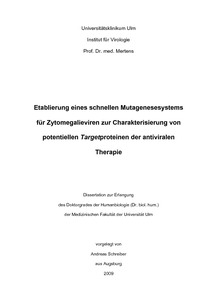 Within this work a markerless fast forward approach recently published for alpha-herpes virus genomes was adapted for the recombination of the considerable larger CMV genomes. Applying this mutagenesis approach, a set of recombinant CMVs containing mutations in proteins, discussed as possible drug targets, was generated. Growth kinetics of a US28 deficient TB40-BAC4 virus revealed no differences in HFF, but showed one log enhanced titers in MDM compared to the according parental or the revertant virus. Additionally, the US28 deficient virus showed considerable higher expression of IE proteins at 4 and 8 hours post infection. Localization studies of the so far uncharacterized UL78 protein after transient expression in HFF showed a predominantly cytoplasmatic localization. Co-localization studies with cellular markers suggest a distribution of the UL78 protein within the ER highly similar to that of calreticulin. This localization pattern was also confirmed in infected HFF with a recombinant HCMV expressing a HA-tagged UL78 protein. Amino acid sequence alignments between the UL78 and the K7 protein of Kaposi sarcoma virus revealed shared domains responsible for protein internalization. This markerless mutagenesis was also adapted to the recombination of MCMV genomes. The coding sequence of the fluorescent protein mCherry was N-terminally cloned to the M97 open reading frame. Between 4 and 12 hours post infection a nuclear localization pattern for the M97 protein was observed by confocal fluorescent microscopy. Unlike its HCMV homologue UL97 the M97 protein is translocated into the cytoplasm later during the replication cycle. Taken together this work clearly demonstrates the feasibility of the new mutagenesis technique for a plethora of different mutations in CMV genomes ranging from point mutations to large insertions. It also suggests a function for the so far widely uncharacterized UL78 protein in posttranslational regulation of other viral G protein coupled receptors.