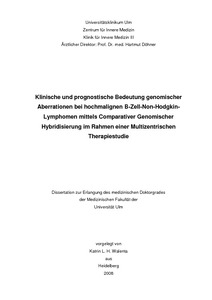 Diffuse large B-cell lymphoma (DLBCL) display a heterogeneous group of aggressive lymphoma. In the past years it could be shown that genomic aberrations are common in this tumor entity, but its prognostic significance is still unknown. Within a prospective, randomized multicenter therapy study patients with DLBCL were treated according to comparable treatment protocols and the prognostic significance of chromosomal aberrations was analyzed. Paraffin-embedded tumor samples of 91 patients treated within the trials NHL-B1/B2 of the German High-Grade Non-Hodgkin´s Lymphoma Study Group were analyzed. In this trial, all patients received similar therapy regimens (CHOP or CHOEP administered every 14 or 21 days). Comparative genomic hybridization (CGH) was performed for the analysis of genomic alterations. The resulting findings were subsequently correlated with the clinical course using the International forecast index (IPI), the event-free survival and survival. It could be shown that in the univariate analysis a significant survival disadvantage exits for gains on 3p14, 3q27, 8p11, 8q24, 12p12 and 18q21 and for the loss 17p13. In the multivariate analysis the aberrations enh8p11, enh8q24 dim17p13 revealed a negative prognostic significance in terms of survival and event-free survival. Besides these findings in the multivariate analysis, it was found that these imbalances that act independently as genetic risk factors of the IPI criteria (International Prognostic Index). In this group of chromosomal aberrations, gain on 18q21 was documented most frequently with 19.8 %. In patients with DLBCL chromosomal aberrations on chromosomes 3, 8, 12, 17 and 18 denote a survival disadvantage. In particular, a gain of 18q21 is an independent predictor for poor outcome in DLBCL.