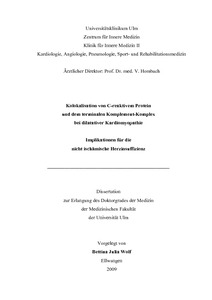 Background: C-reactive protein (CRP) has been suggested as a risk factor in cardiovascular disease. Recently, it has been shown that CRP binds to ligands exposed in ischaemic damaged tissue and activates the complement system. Furthermore, CRP was demonstrated to be strongly and independently associated with the occurrence of heart failure in men. In this study we have investigated the presence of CRP and the Terminal Complement Complex (C5b-9) in the myocardium of patients suffering from non-ischaemic heart failure. Methods and Results: Endomyocardial biopsies were taken from 151 patients suffering from dilated cardiomyopathy. Biopsies were immunohistochemically analysed for the presence and distribution pattern of CRP and C5b-9. In 39 patients plasma levels of hsCRP and NT-proBNP were measured and correlated with myocardial biopsy findings. In 47 patients a positive staining for CRP and in 141 patients a positive staining for C5b-9 were detected. CRP and C5b-9 significantly co-localized within the myocardium. A negative correlation was observed for plasma hsCRP levels and myocardial CRP. Conclusions: This study shows for the first time that CRP is frequently present in the myocardium of patients suffering from non-ischaemic dilated cardiomyopathy and co-localizes with the Terminal Complement Complex. CRP may contribute to myocardial damage in dilated cardiomyopathy via activating the complement system.