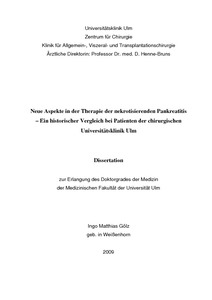 The intention of this retrospective study was to investigate, if the mortality of patients with an acute necrotizing pancreatitis at the surgical universitary hospital Ulm, decreased within the past two decades. In that case the study tries to find out which factors were the reasons for this development. Therefore, the patients from 1991-97 (n=121) und the patients from 2001-06 (n=49) were compared. Especially the duration of the antibiotic prophylaxis and the duration of the conservative treatment before starting with the first surgical intervention were of interest. Both, the patients of the two groups, and the patients undergoing surgical respectively conervative treatment were compared. Finally two logistical regression models were calculated, for all patients of both groups as well as only for the operated patients of both groups. The target variable for both models was the mortality. Conclusion: Mortality decreased from 28% to 14%. Especially in the group of operated patients, the mortality decreased (from 41 to 19%). The variables taking influence on mortality were age, renal insufficiency, shock for all patients and age, dialysis, ranson score for operated patients. Furthermore, the durance of antibiotic prophylaxis and the durance of conservative treatment extended. Considering the value of the Ranson Score and the occurrence of organ failures, it seems as if patients in the second group (2001-06) were in a better physical constitution.