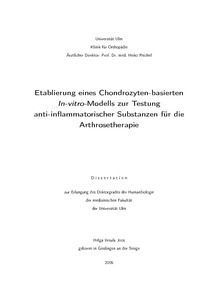 A main challenge in the therapy of osteoarthritis (OA) is the development of disease modifying osteoarthritis drugs. Reliable test systems are necessary to enable an efficient screening of therapeutic substances. Therefore, a chondrocyte based in vitro cell culture model was established in order to characterize different anti-inflammatory inhibitors. IL-1ß -stimulated human OA chondrocytes were treated with different inhibitors. In order to characterize the cell culture model and the therapeutic substances, gene expression analyses and a genome-wide microarray analysis was conducted. The release of PGE2 and NO was quantified. The analyses confirmed typical cytokine-induced inflammatory processes and inhibitory effects of anti-inflammatory substances in the established model in accordance to published data. Microarray analysis of p38MAPK inhibitor-treated cells revealed inhibitor-specific differences in gene expression in spite of the same pharmaceutical target. Whereas SB203580 had a broad effect on chondrocytes, Birb 796 counteracted the IL-1ß-effect more specifically. In addition, microarray analysis revealed that IL-1ß is involved in the regulation of many cytoskeleton related genes. The expression and regulation of four genes coding for LIM proteins were shown, that were undescribed in chondrocyte context so far. The application of different reference inhibitors and new substances showed significant inhibition of the IL-1ß-induced gene expression of COX2, PTGES, NOS2A, MMP13 and OPG as well as PGE2 release in quantitative analyses. Concerning the inhibition of COX2 and MMP13 gene expression as well as PGE2 release, Birb 796 and CBS-3868 showed a higher efficacy than SB203580 and pamapimod. Our test system could differentially characterize inhibitors of the same primary pharmaceutical target. It reflects processes relevant in OA and therefore represents a valuable tool for drug screening in between functional in vitro testing and in vivo models.