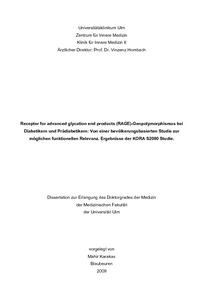 Purpose: The receptor for advanced glycation end-products (RAGE) seems to play a pivotal role in the initiation and development of atherosclerotic lesions in patients with type 2 diabetes mellitus (T2DM). It has been suggested, that the Gly82Ser polymorphism in the RAGE gene might influence cell responsiveness, thereby leading to an increased inflammatory response. Thus, we sought to investigate whether RAGE Gly82Ser SNP is associated with impaired glucose tolerance (IGT) and T2DM, and whether it could amplify a cellular perturbation in a proinflammatory environment, like in the diabetic milieu with increased S100 accumulation. Methods: Genotyping in 254 patients with T2DM, 353 subjects with IGT and 878 age and gender-matched controls was performed using MALDI-TOF. Acute phase reactants, cytokines and lipids were determined with standard techniques. Monocytes were isolated from 5 T2DM patients with G82S genotype, and 5 controls, bearing the G82G genotype to assess ex-vivo cytokine expression via ELISA as well as phosphorylation of p38 MAP kinase (MAPK) via Western blot. Results: Neither in crude, nor in multivariable analyses, Gly82Ser genotype was independently associated with IGT (OR 1.16; 95 % CI 0.67 - 2.02) or T2DM (OR 0.48; 95 % CI 0.16 - 1.46). Moreover, markers of inflammation did not significantly differ in subjects bearing the GG genotype compared to Gly82Ser heterozygotes. Furthermore, no statistically significant differences were observed in the induction of TNF-alpha; and IL-6 expression in supernatants under stimulation with S100 in subjects bearing GG vs GS genotypes. Similar findings were obtained with respect to activation of phospo-p38 MAPK. Conclusions: Our data indicate that the RAGE Gly82Ser SNP is not associated with increased risk of IGT or T2DM. Furthermore, we found that the RAGE GA genotype had no impact on the amplification of cellular perturbation in a pro-inflammatory environment - e.g. under stimulation with S100.